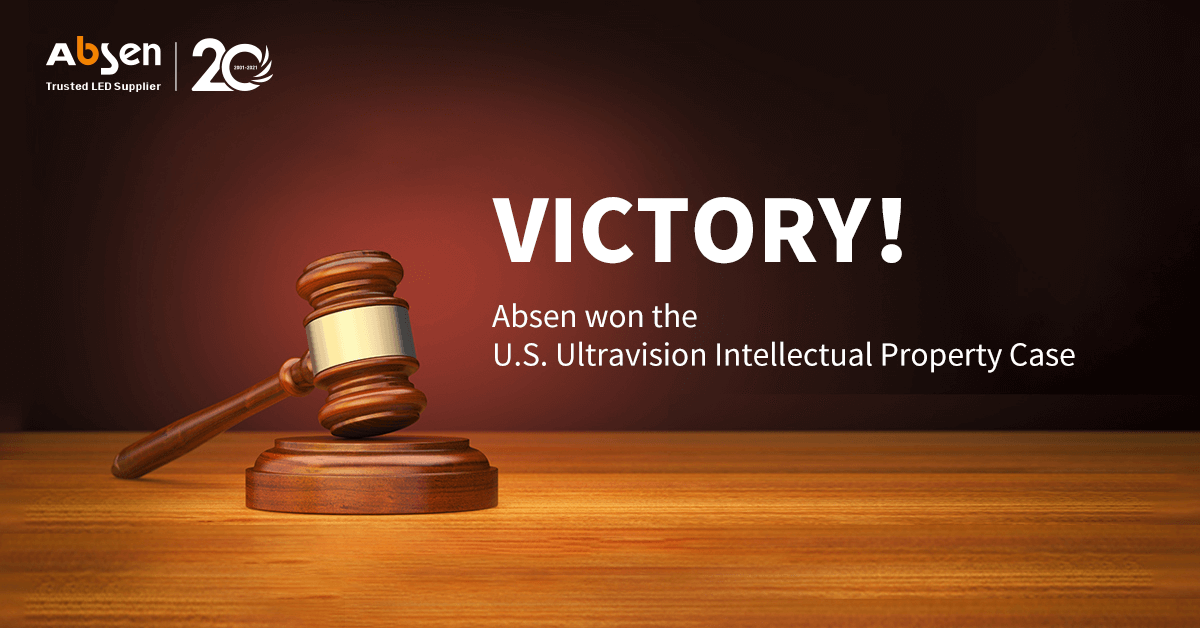 On June 12, 2021, a federal jury in the United States District Court for the Eastern District of Texas delivered a complete victory for Absen in a patent infringement lawsuit.  In the case, Ultravision alleged that Absen LED display products exported to the United States infringed certain patents.  The unanimous jury verdict found that none of the nine Absen accused products lines infringed any of the asserted patent claims.  The jury also determined that all asserted patent claims were invalid.  The ruling followed after four days of testimony and about only three hours of jury deliberations.

As a leading LED display company that is deeply involved in the international market, Absen has, since its establishment 20 years ago, consistently adhered to its core principles of technological innovation and respect for intellectual property rights.  After being sued in 2018, Absen actively responded.  It set up a special team of internal experts as well as external American lawyers led by Goodwin Procter LLP.  Absen also partnered with other Chinese LED display companies (Glux, Leyard, Liantronics, and Unilumin).  Particularly, the partnership included jointly retaining Goodwin Procter and executing a joint response strategy.  With the overall planning and efforts from all parties, a highly successful result was received in the US court and Absen thanks all involved.

While Ultravision has sued nearly 40 LED display companies for patent infringement, many of those companies either chose not to contest Ultravision’s assertions or paid a settlement fee.  This case is a milestone because it is the first time an LED display company has refused to settle with Ultravision and, instead, Ultravision’s patent claims have been fairly and justly decided on the merits.  The result has a great influence on the global LED display industry and is also a good reference for companies in other industries that export products to the United States.

Established in 2001, Absen is the world's leading LED display brand, renowned for its high-quality products, global presence and full-service capabilities. Absen's displays cover a wide range of applications including Commercial Display, Data Visualization, Rental & Staging, DOOH and Corporate. Through constant innovation and development, Absen has been the No.1 Chinese manufacturer in exporting LED displays for 12 years in a row, making it the brand of choice for some of the most prominent brands, integration partners and rental companies around the world.