Introducing the day, Brian Macauto, VP Industry Development Director for Absen said: “We are increasingly seeing the impact of LED in filmmaking, and we are pleased to be supporting the virtual production trend with this event. We have put together an event today which helps to explain the latest innovative tech and to highlight the possibilities - we see this vibrant market as full of potential and we want to continue to collaborate with exciting partners in this industry to keep pushing the boundaries of what we can achieve together.”

The team created a film theatre environment in the VP Studio, using the Absen PL2.5 Pro V10 as the backdrop, which is an ideal choice for VP or xR stage with its superb visual performance. The Virtual Production Forum began with a ‘VP, where are we now?’ talk and went on to include sessions covering VP build, workflows, and pipelines, as well as panel discussions that saw industry professionals share their experiences of working in VP, and amongst other insights, offer advice on how to upskill to take advantage of the new opportunities opening up thanks to the explosion of interest in VP. Leading film industry technologist and Absen’s newly appointed VP Consultant, Tom Witkowski, said: “In every way, the Virtual Production Forum was a success. We had a full house of visitors from the UK and internationally, and the sessions proved to be ‘standing room only’ popular. I’d like to thank our event partners, Absen, Procam Take 2 and Garden Studios for having the foresight in organising this much-needed event, as well as, of course, their equipment and space which was put to such good use. I’m looking forward to the next VP Forum already.”

Rich Phillips, CTO, Garden Studios commented “It was our privilege to host and participate in the VP Forum, inspiring to hear from the excellent panel of leading industry professionals, and a pleasure to meet the many attendees who share our passion for the future of Virtual Production as part of the film-making tool set. We thank our partners for their support and look forward to future collaborations with them as this technology continues to evolve and grow in relevance not just to Garden Studios but the whole industry.”

Saul Gittens, Head of Training and Development at Procam Take 2 adds: “It was an honour to be able to contribute to such a remarkable event, bringing together so many leading minds from across the full VP spectrum. Having worked as a DOP on many virtual productions through Procam Take 2 and Garden Studios, it was extremely rewarding to be able to share my experiences with a room full of enthusiastic attendees.” 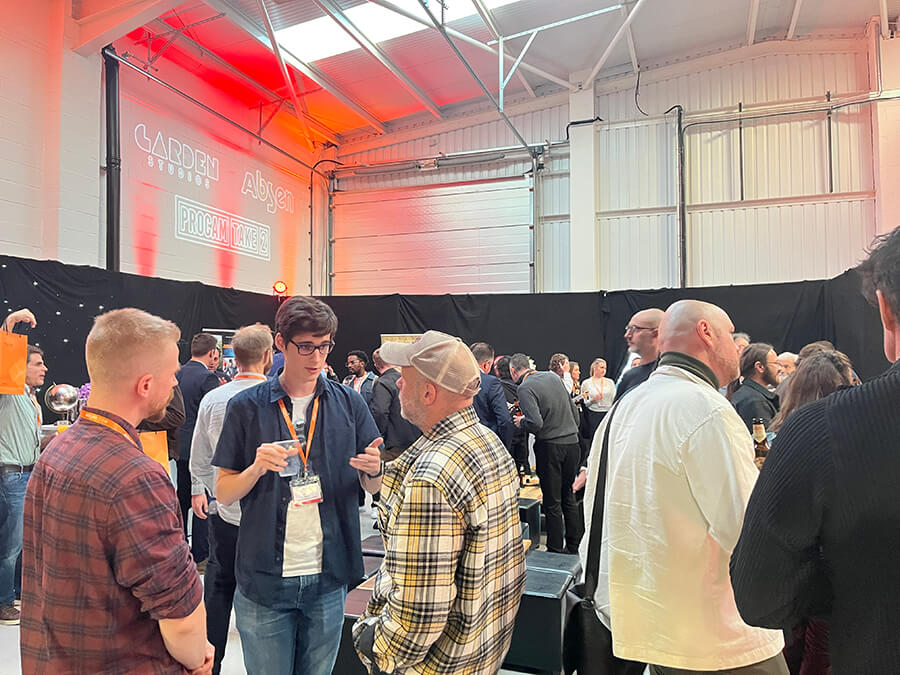 Tom Clarkson, the award-winning writer/director, played host for the day and provided entertaining and informative introductions to each topic drawn from his own experience in film, television and theatre as well more recently, VP. He also put his directorial skills to use on the mini space opera ‘Going Home’ which was scripted and produced by the team at Garden Studios especially for the event. Throughout the day the audience were taken inside the creative VP process as the dramatic story of a rogue spacecraft crash-landing on a remote planet unfolded. The drama in outer space was effectively recreated in the Virtual Production Studio and filmed thanks to the Absen LED screens, cameras and accessories supplied by Procam Take 2, as well as the in-house production and post-production team at Garden Studios. The day finished with a premiere of ‘Going Home’ which was received with much acclaim and even a suggestion that it could hold water as a proof of concept – look out for the feature length version in due course!

The Virtual Production Forum saw the European debut of Absen’s new flagship VP solution, the PR 2.5. Built of carbon composite with an achievable weight as low as 22kg per m², the PR 2.5 is a lightweight large panel and is initially available in 2.5mm pixel pitch with 3.9 and 5.2 planned. The PR Series is designed as an all-in-one platform for both VP backdrop and ceiling with a high contrast ratio. A revolutionary product with ultimate display performance, it offers a wide colour gamut, fast heat dissipation and provides a 16% reduction in power consumption compared with older products. With the customized lock system, users can quickly complete installations including hanging, stacking and other layouts

The Technology Zone, an area created by the team at PSCo, featured the Absen PL 1.9 PRO v10 alongside ARRI cameras and Brompton processors recreating VP production facilities on a smaller scale. As a professional virtual production product for high-end film studio and XR stage, the PL1.9 Pro V10 is a 4-in-1 IMD product with patented TOP frame (minimises moiré effect), featuring high brightness and best white uniformity, covering 98.2% of the DCI-P3 colour gamut on average. The PL series is recommended for general virtual studios, especially large ones. The PL Series is a high-performance, broadcast grade, high-definition display with high-grade electronics and advanced mechanical design.

Also featured in the demo area was the AX Pro series; an outstanding 1mm product platform that can be used as a backdrop in the medium size studio, including the AX1.2 Pro and AX1.5 Pro. The AX1.2 Pro is the world’s first flip-chip IMD product using the advanced common cathode technology. It supports HDR, with a maximum brightness of 1500nits and a high refresh rate of 7680Hz. There is no colour deviation even at a viewing angle of 170 degrees horizontally and vertically.

Jess Golding, Absen European Brand & Marketing Director sums up the day: “We had an amazing event which was extremely well-attended. The agenda for the day was packed with interesting sessions and the feedback we have received has been extraordinary. We are already planning next year’s edition and we look forward to this being an annual event for the virtual production community.”